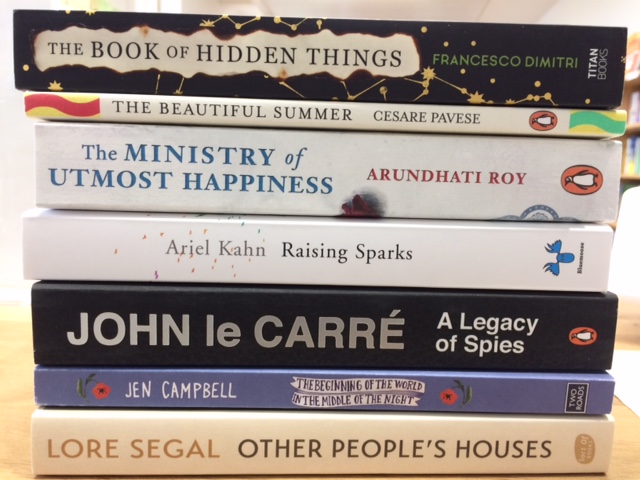 Needing some help to decide what to read next? Wondering what books to pack in your suitcase? Having a staycation and giving yourself plenty of reading time? Here are the books we will be reading over the summer and we’re delighted to offer £1 off each of them.

The Beginning of The World in the Middle of The Night by Jen Campbell.

The Ministry of Utmost Happiness by Arundhati Roy.

We meet Anjum, who used to be Aftab, who runs a guesthouse in an Old Delhi graveyard and gathers around her the lost, the broken and the cast out. We meet Tilo, an architect, who, although she is loved by three men, lives in a ‘country of her own skin’. When Tilo claims an abandoned baby as her own, her destiny and that of Anjum become entangled as a tale that sweeps across the years and a teeming continent takes flight . . .

Other People’s Houses by Lore Segal.

Nine months after the Nazi occupation of Austria, 600 Jewish Children assembled at Vienna station to board the first of the Kindertransports bound for Britain. Among them was 10 year old Lore Segal. For the next seven years, she lived as a refugee in other people’s houses, moving from the Orthodox Levines in Liverpool, to the staunchly working class Hoopers in Kent, to the genteel Miss Douglas and her sister in Guildford. Segal evokes with deep compassion, clarity and calm the experience of a child uprooted from a loving home to become stranded among strangers.

The Beautiful Summer by Cesare Pavese.

Under the spell of her new friends, Ginia soon falls in love with Guido, an enigmatic young painter. It’s the start of a desperate love affair, charged with false hope and overwhelming passion – destined to last no longer than the course of a summer. The Beautiful Summer is a gorgeous coming-of-age tale of lost innocence and first love, by one of Italy’s greatest writers

Malka Sabbatto is a young woman who flees the confines of her traditional family in Jerusalem, followed by Moshe, a Russian immigrant and her father’s top student. After falling in with a sinister cult in Safed she escapes to Jaffa, where she starts to build a new life under the wing of an Arab chef. When she feels she has finally found contentment, a family tragedy forces her to return to Jerusalem.

The Book of Hidden Things by Francesco Dimitri.

Four friends have a pact: to meet up on the same day every year in their small hometown in southern Italy. Art, the charismatic leader of the group, has always been adamant about the pact. But this year, he doesn’t show up. Searching for him, the friends make a worrying discovery: Art has been farming marijuana, a very dangerous activity in mafia-controlled country. And then, amongst the chaos of his house, they find a curious manuscript written by Art called The Book of Hidden Things, which promises to reveal secrets enchanting as flames, and just as treacherous…

A Legacy of Spies by John le Carre.

Peter Guillam, former disciple of George Smiley in the British Secret Service, has long retired to Brittany when a letter arrives, summoning him to London. The reason? Cold War ghosts have come back to haunt him. Intelligence operations that were once the toast of the Service are to be dissected by a generation with no memory of the Berlin Wall. Somebody must pay for innocent blood spilt in the name of the greater good .

Instagram
Just a reminder that we close at 4 pm today. We will then close for a week due to the filming @thepiecehall .Back Tuesday 1st Feb at 10 am .See you soon 📚❤️ #halifax #calderfornia l
Stuck for a new book to read or fancy adding to your to be read pile .We have some fantastic fiction new in this week . #fantasticfiction #newtitles #books #bookstagram #indiebooks @faberbooks @vintagebooks @bloomsburypublishing @picadorbooks @canongatebooks @grantabooks @scribnerbooks
We do get excited when we open a box of new titles from @bloomsburypublishing @bloomsbury_north . Even more excited when it’s the paperback of Male Tears by our bestselling author @benmyers76 . #newbooks #shortstories #piecehall #halifax #calderfornia
Please note that for the winter months , The Piece Hall will be closed on a Monday . Apologies for any inconvenience. Back Tuesday 10-5 . Come and see us . #bookstagram #bookshopsofinstagram #indiebookstore #piecehall #halifax
New selections for January! Short story collections, indie publishers, and fiction in translation.
We will be open Wednesday 11-4 . See you then. #bookstagram #indieshops #piecehall #halifax
My Tweets
%d bloggers like this: