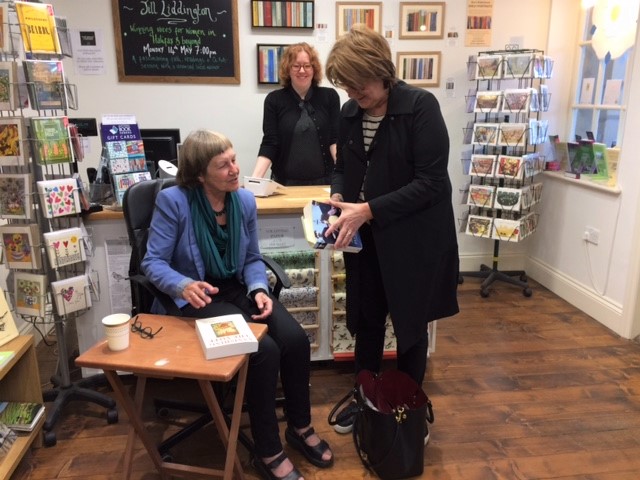 We were delighted to have the renowned local writer and historian Jill Liddington join us in the shop yesterday evening. Jill is interested in women’s history with her main research focusing on the Votes for Women story. Jill’s involvement with the local aspects of the story started when she moved next door to the mill where Annie Kenney worked and have lead to her being heavily involved with this year’s Vote 100 celebrations.

The event was a sell out and we even managed to squeeze in a few people who turned up on the off chance. Clearly many people wanted to know more about the local suffragettes.

Jill gave a fascinating talk about the Votes for Women campaign, looking at the contributions of both the suffragists and the suffragettes. As well as giving an overview of the national campaign and snapshots of important events she also discussed the involvement of local women such as Dora Thewlis and Lavena Saltonstall. Jill’s book Rebel Girls covers the stories of these and many other northern campaigners.

Jill had several pictures to illustrate her talk, including ones of street processions and banners. Everyone was interested in the copy of the census records of 1911 which showed a married man with a child at an address with a mysteriously missing wife – a census evader. Jill’s book Vanishing For The Vote tells the story of the women who boycotted the census as they did not count as full citizens.

After the talk Jill took questions from the floor and did a book signing.

Many thanks to Jill for such an interesting evening and thank you to all who came along to listen.