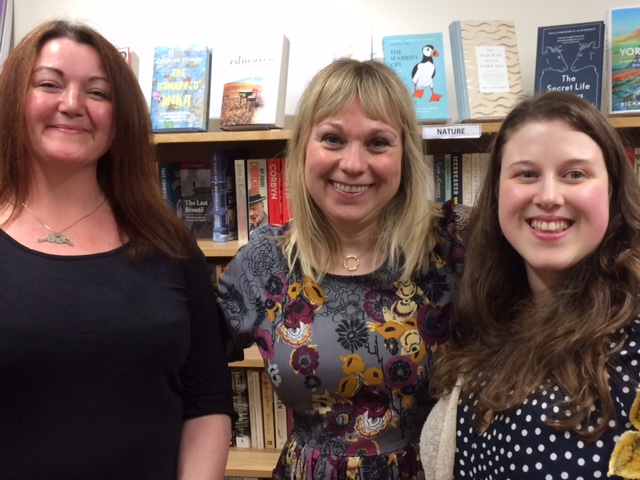 Last night we were delighted to host the launch of  Vicky Gatehouse’s first poetry pamphlet, Light After Light. Vicky is a local poet; her work has been widely published in magazines and anthologies. Light After Light contains twenty poems exploring science and art.

Light After Light is published by Valley Press – an independent publishing house based in Scarborough. Assistant Publisher Jo Haywood attended and introduced Vicky and Valley Press.

Vicky read a couple of poems, giving us insight into the inspiration behind each one. We had a full house, all listening intently. The Geese of Sowerby Bridge made many people recall their experiences of cross geese blocking their way.

Wendy read three poems from her latest book Gifts The Mole Gave Me. I particularly enjoyed Starlings, a wonderful poem about her mother’s conversations with her siblings that conjured up bird song and flight.

Jo read two poems from her book The Learned Goose and one new poem. As an ex Brownie I enjoyed Girlguiding which captures the Brownie enrolment ceremony perfectly but with a sadness born of not being the same as the others.

After a short break Vicky read a further selection of poems from her book. I was thrilled that Vicky read Flame Test after I had mentioned that it strongly resonated with me due to my science and education background. Brace bought back memories of embarrassment and only being able to eat soggy weetabix, experiences of a brace wearing bought to life perfectly.

Vicky then met with the audience and was kept busy signing her books.

It was a super evening. Thanks to all who attended.

Instagram
We've got a stonking Yorkshire-heavy bestsellers list for June... Alan Bennett followed by our own @benmyers76 @philearle @harryheapebooks @helenawhitbread Paul Weatherhead @michaelstewartwriter and @chrisgoddardmap. The very best of writing. #halifax #indiebookshop #books #annelister #yorkshire
Super excited to receive these copies of Into the Wilds, the first publication from new indie press @foxandwindmill!
Thanks so much to @michaelstewartwriter for a wonderful evening yesterday, and to @mrwright2317 for hosting. Signed copies of Walking the Invisible and lots of Michael's other titles available here #books #indiebookshop #bookevent #halifax #brontë #thornton
WALKING THE INVISIBLE: on Wednesday @michaelstewartwriter will be doing an event with us to talk all things Brontë. Michael will be reading, answering questions, and signing. Tickets £3, available in-store or online (link in bio). #books #indiebookshop #bookevent #brontë #walks #halifax @harpercollinsuk @discoverhx @bronteparsonagemuseum
Just arrived... @stu_hennigan and @bluemoosebooksofficial new title GHOST SIGNS. Looking forward to our event with Stu on 21st July - entry is free but spaces can be reserved online or in-store #books #indiebookshop #indiepublisher
Temporary opening hours changes:
My Tweets
Loading Comments...
%d bloggers like this: