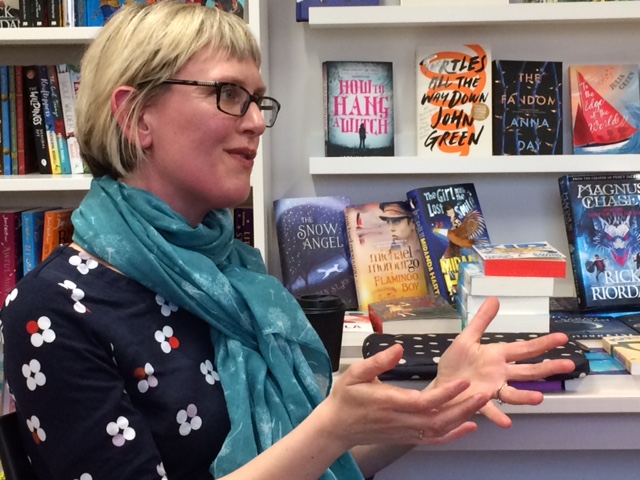 Back in December we had the idea that we wanted to set up a Young Adult Book Club here at the Book Corner, an opportunity to invite young people into the shop to talk about books, what excites them, what infuriates them and let them speak about the stuff that matters. We then thought it would be EVEN better if we could invite an author in to talk to our readers… and that is exactly what happened last week at our inaugural YA Book Club.

We were very lucky that Liz Flanagan, uber talented local author from Hebden Bridge, agreed to join us for our first YA Book Club meeting. Initially we thought it was because we had promised biscuits but actually it was because Liz has such passion for writing, reading and chatting about young people’s experiences that it would have been rude not to have included her. Needless to say, it was a great first meeting and Liz was completely brilliant. Thank you Liz.

Here is a little bit of what we talked about.

So Liz, can you give us an overview of what Eden Summer is about please without giving away too many spoilers?

I didn’t know when I was writing it that it was a thriller, that’s what people said afterwards. It’s about what happens when a girl, Jess, goes to school one day to find that her best friend has gone missing – it considers just how awful that would feel. I had this idea that all of the events in the book could happen over one day. So that gave me the shape of it and then there are flashbacks over the summer they’ve just had, some of the difficult things Jess has been through. I wanted to put some of the feeling of experiencing a long summer holiday where so much happens and how you can return to school a different person. I wanted to think about sibling rivalry and sibling grief, having recently lost my own brother, and also about friendship, particularly close female friendship.

How difficult do you think it is for a writer to get away from their own experience when writing, even if it’s subconscious?

None of what happens in the book is my experience exactly but it grew out of thinking about some of those things and being a teenager in Hebden Bridge.

What was the starting point for the novel, did a character come to you, or was it a story or a moment?

For years and years I had these three characters in my head, two girls who are best friends and the boyfriend of one of them who was maybe more suited to the other. In my life I’ve often been in a friendship group that had three people in it. When I was a teenager I had a close friend and then she started going out with my brother. Then when I went to uni, I had another great friend and she got together with a guy and the three of us lived in the same house and that worked really well, too. So triangular friendships are really interesting to me. But even though I had the characters, I didn’t have the story. Then I read about the murder of Sophie Lancaster, a young girl who dressed in a goth style who was attacked with her boyfriend one night when they were in a park. Eden Summer is not that story but it’s a story where a young person is attacked and I wanted to ask if you survived that, what would you feel like? How do you find that resilience and way of carrying on?

Did you always know that you were going to write a story set in and around Hebden Bridge?

No I didn’t. I spent about ten years writing other stories about other places. But they didn’t get published and I had this sense that this might be my last shot so I brought it close to home in terms of geography and also in terms of the more personal things I’d experienced: bereavement after my brother and my best friend died. And I thought, just try and write it from the heart and set it in the place you know. And it was different, it felt like I was really putting my heart and soul into it.

Did you know that it was explicitly going to be a Young Adult tale?

Yes, definitely. The characters, when they came to me, were teenagers. And I was remembering what it was like to be a teenager in Hebden Bridge, the friendships, and when you start going out, when you’re doing all of those things for the first time. All of that made it YA.

How important is it for you to be writing about young people, about difficult issues that may not get talked about ie. bereavement, identity?

I think it’s something that YA does really well because if you have gone through something that you see mirrored in a book then that can give you comfort, you’re not the only person going through that. And if you haven’t gone through it then at least it gives you a way of imagining what it might be like so if you ever did encounter that, it’s almost like a script where someone has found a solution so maybe you could find something similar too. It’s escapism anyway, it takes you away from yourself to read about another person’s experience whether or not you’ve been through it and I look for that when I’m reading fiction. Sometimes I want something that mirrors my life experience and sometimes I want something completely different.

Did you know how it was going to end when you started writing?

No! I knew where the ending was going to take place, in a particular part of the valley, by the river in my hometown, but I didn’t know until I got to it whether it was going to be a happy ending or a sad ending and I don’t want to give away any spoilers! I was writing this as part of a PhD at Leeds Trinity University which meant that I had a supervisor working with me and he was really helpful. I wrote the scene all at once which was cathartic and then I went back and made some small changes.

Did you plan to write the story as events happen over one day or did you discover that narrative device during the writing process?

I’ll be really honest with you, the first time I tried to write this book it was a complete disaster! It had three characters but Jess was actually dead in that version – so like The Sixth Sense, the main character is actually dead but she doesn’t know she’s dead until right at the end. So every scene had to have three people in it and two of them would be having a chat and Jess would think she was joining in but she wasn’t. And it just didn’t work. I showed it to my PhD supervisor and he thought that the characters were good, that there was something there, but that I needed to start again! So I started again and I decided that Jess was going to be alive and that she was going to change, she was going to be dynamic and somebody who survives and that’s when I had the idea of making it happen all in one day. That’s when it started to come together. I began that version in October and by the following Easter I had finished the story. And then I spent about a year editing it.

Are there any characters who didn’t make it into the final version?

Yes, loads! In the first draft there was a character called Sam who was also dead. He was Jess’s friend and he was a bit of a love interest for her so he got changed into Liam a little bit. And there were some other peripheral characters who I lost but I made some of the other characters stronger too.

Did you always want to include Yorkshire dialect?

Yes, I definitely wanted to put some Yorkshire dialect in because when I was reading YA myself I didn’t often find northern characters. But I didn’t want to make it sound odd to people who aren’t from here so I just wanted to have a little bit, the rhythms of speaking. I wanted to feel like I was representing West Yorkshire.

And finally, which other authors inspire you?

There are so many! We’re really lucky to be reading YA right now because there are some fantastic authors out there.

At this point, we start grabbing books from the shelf and Liz recommends some books:

One by Sarah Crossan, The Knife of Never Letting Go by Patrick Ness, Children of Blood and Bone by Tomi Adeyemi , Goodbye, Perfect by Sara Barnard, The Stars of Oktober Bend by Glenda Millard, See How They Lie by Sue Wallman,  Twenty Questions For Gloria by Martyn Bedford, I’ll Give You the Sun by Jandy Nelson, Indigo Donut by Patrice Lawrence.

Liz’s next book is a fantasy novel called Dragon Daughter, which will be published in October by David Fickling Books.