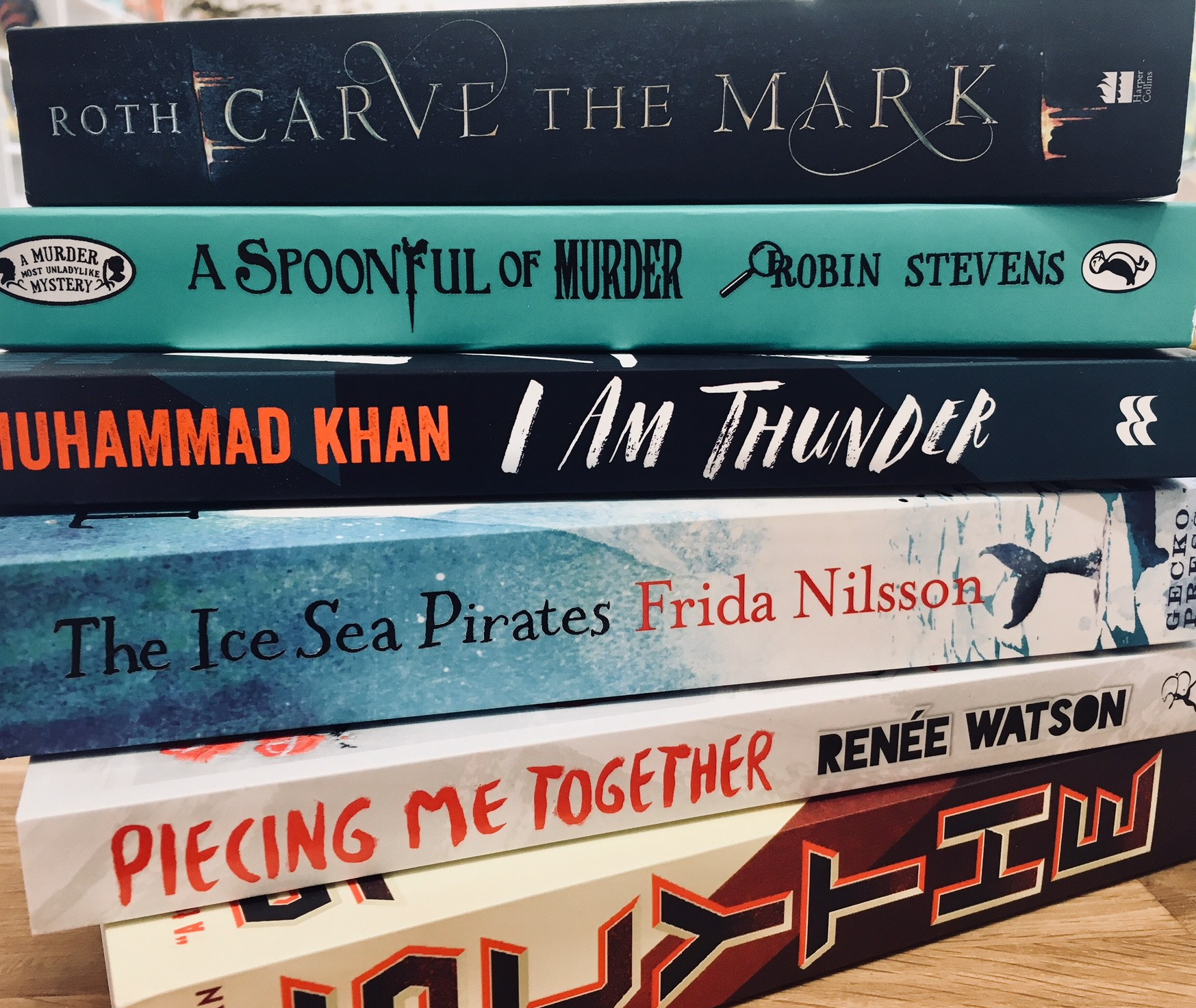 For our younger readers

Star in the Jar by Sam Hay and Sarah Massini

A little boy finds a star and puts it in a jar so that he can take it to places. The star misses its home and the little boy and his sister try to find a way to send it back. A lovely story and beautifully illustrated.

Dog in Boots by Paula Metcalf

Philip falls in love with Penelope but thinks he is too short to kiss her. He comes up with plenty of plans to make himself tall that don’t quite work. A great story with lift-the-flap illustrations.

I Love You Stick Insect by Chris Naylor-Ballesteros

Stick Insect has fallen in love and imagines all the places he will take his sweetheart and all the fun things that they will do. But, there is a problem and Butterfly knows what it is.

What’s Your Favourite Colour? by Eric Carle and Friends

This wonderfully illustrated book takes a colour per double page spread. The artist explains why it is their favourite. A super way to look at colours.

Siri is going to rescue her sister from the Ice Sea Pirates. She will not let anything stop her, even ice, wolves, thieves and mermaids. A chapter book with some illustrations.

A Spoonful of Murder by Robin Stevens

The seventh title in the Murder Most Ladylike series. Daisy Wells accompanies Hazel Wong to her family estate in Hong Kong after her grandfather dies.There has been a murder and a kidnap and the girls work together to solve the crimes.

I Know a Woman by Kate Hodges

This book is beautifully illustrated by Sarah Papworth. It celebrates female collaboration and tells the stories of the achievements  84 women from sports, arts, science and politics. Women from Josephine Baker to Emma Watson and Angela Carter to Nina Simone are covered and links are drawn between them. It is a fascinating read.

This book has stunning black and white illustration, it really is beautiful. Published to mark the 200th anniversary of the publication of Frankenstein it tells the story of Mary Shelley. A dramatic and compelling tale of a teenage runaway outcast by society.

What Would She Do by Kay Woodward

This beautifully illustrated book tells the life stories of 25 inspirational women from Ada Lovelace to Rosa Parks. It covers female world leaders from centuries ago to modern day heros and has a global scope. Each profile concludes with a ‘what would she do?’ question, inviting readers to apply knowledge from the section to modern day scenarios.

A fascinating and fantastically illustrated book which looks at the global struggle for women’s suffrage and equality. Set out as a timeline each double page spread covers a country and the main events that women took part in to gain the vote.

A Sci-Fi thriller set in a perfect world. The only way to die is to be gleaned by a professional scythe. Citra and Rowan are chosen to be apprentices. They have to battle this fate along with the corruption in their world.

Carve The Mark by Veronica Roth

From the author of the Divergent series. Cyra and Akos grow up in enemy countries. Cyra has an extraordinary ability and Akos is forced to serve her. In the fight for what is right will they choose loyalty or love?

The Wren Hunt by Mary Watson

Every winter boys hunt Wren Silke through the forest. If they knew her true identity the game would turn deadly. Wren is on an undercover mission to enable her family to survive. Enmity between two ancient magics reaches breaking point and Wren is trapped in a dangerous game.

I Am Thunder by Muhammad Khan

Muzna Saleem is used to being invisible so she is surprised when Arif, the hottest boy in school, takes an interest. He is hiding a terrible secret and Muzna faces an impossible choice. Should she betray her beliefs or her heart?

Piecing Me Together by Renee Watson

Jade is striving for success in a difficult world. At her private school she feels like an outsider, away from her friends but with plenty of opportunities. Jade feels like her life is made up of hundreds of conflicting pieces. Will she find her place in the world?

Like Loading...
Category: Shop News
Tag: new titles
Instagram
Thanks so much to @michaelstewartwriter for a wonderful evening yesterday, and to @mrwright2317 for hosting. Signed copies of Walking the Invisible and lots of Michael's other titles available here #books #indiebookshop #bookevent #halifax #brontë #thornton
WALKING THE INVISIBLE: on Wednesday @michaelstewartwriter will be doing an event with us to talk all things Brontë. Michael will be reading, answering questions, and signing. Tickets £3, available in-store or online (link in bio). #books #indiebookshop #bookevent #brontë #walks #halifax @harpercollinsuk @discoverhx @bronteparsonagemuseum
Just arrived... @stu_hennigan and @bluemoosebooksofficial new title GHOST SIGNS. Looking forward to our event with Stu on 21st July - entry is free but spaces can be reserved online or in-store #books #indiebookshop #indiepublisher
Temporary opening hours changes:
So lovely to chat with @helenawhitbread today . We now have SIGNED COPIES of The Secret Diaries of Miss Anne Lister .#annelister #gentlemanjack #annwalker #listersisters #halifax #diaries #shibdenhall . These signed copies are now for collection only .
A lovely morning with @harryheapebooks signing copies of the latest Indiana Bones . We now have SIGNED copies . Link in bio .
My Tweets
Loading Comments...
%d bloggers like this: