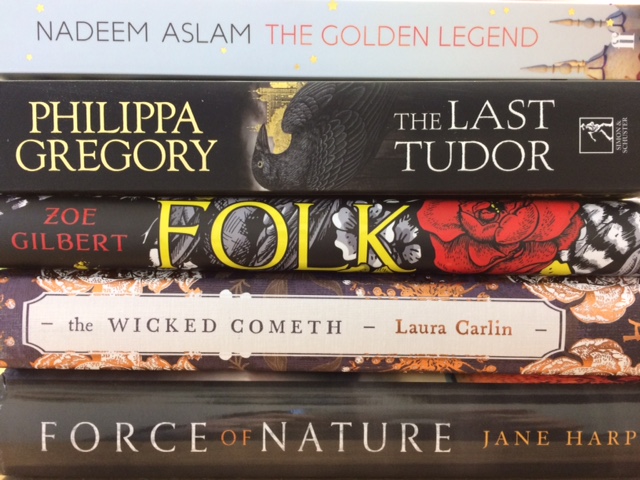 The Golden Legend by Nadeem Aslam

A timely and luminous story of corruption, resilience and hope. For weeks, someone has been broadcasting people’s secrets from the minarets of the city’s mosques, striking fear into the hearts of Christians and Muslims alike. Nargi’s husband, Massud, is caught in an incident and she is unable to confess her greatest secret to him. Is it a matter of time until her past is exposed?

The Last Tudor by Philippa Gregory

Jane Grey was Queen of England for nine days before Mary Tudor deposed her. Jane’s younger sister Katherine intends to enjoy her beauty and fall in love. Her existence is a threat to Mary and to Elizabeth I. When her pregnancy exposes her secret wedding Katherine faces the scaffold. The youngest Grey sister, Mary, keeps family secrets and is disregarded by the court. What will happen when the last Tudor defies her ruthless cousin Queen Elizabeth?

The Toymakers by Robert Dinsdale

It is 1917, and while war wages across Europe, in London there is a place of hope and enchantment. The Emporium sells toys that capture the imagination of children and adults alike: patchwork dogs that seem alive, toy boxes that are bigger on the inside, soldiers that can fight battles on their own. Into this family business comes young runaway Cathy Wray. Cathy is about to discover that the Emporium has secrets of its own.

The Wicked Cometh by Laura Carlin

See our Book Recommendations page for a review.

Force of Nature by Jane Harper

Five women reluctantly pick up their backpacks and start walking along the muddy track.Only four come out the other side. The hike is meant to take the office colleagues out of their air conditioned comfort zone and teach resilience and team building. The women tell police officer Falk a tale of suspicion, violence and disintegrating trust. As he delves into the disappearance it seems some dangers may run far deeper than anyone knew.

The remote island village of Neverness is a world far from our time and place. The villager’s lives are inseparable from nature and its enchantments. Verlyn Webbe, born with a wing for an arm, unfurls his feathers in defiance of past shame. Madden sleepwalks through violent storms, haunted by horses and her father’s wishes. Crackling with echoes of ancient folklore, but entirely, wonderfully, her own, Zoe Gilbert’s Folk is a dark, beautiful and intoxicating debut.

Date with Mystery by Julia Chapman

Published on 22nd March. The third novel in the Dales Detective series. Hired by a local solicitor to find a death certificate for a woman who died over twenty years ago, Samson O’ Brien is about to find out that things in Bruncliffe are rarely straightforward. He works with Delilah Metcalfe who has a wealth of local knowledge. As they begin their enquiries they become embroiled in a mystery that has laid at the heart of the town for decades.

The Music Shop by Rachel Joyce.

Published on 22nd March. 1988. Frank owns a music shop jam packed with records. Day after day Frank finds his customers the music they need. Ilse Brauchmann walks into his life and his instinct is to turn and run. He is strangely drawn to her and Isle is not what she seems. Frank has old wounds that threaten to re-open and a past that he will never leave behind.

A brisk, comic tour de force about identity, history and the adhesive bandage industry. The town of Winthrop has decided it needs a new name. The resident software engineer, the mayor and the town’s aristocracy all have different ideas. They realise they need a nomenclature consultant. In a culture overwhelmed by marketing, the name is everything and our hero’s efforts may result in not just a new name for the town but a new and subtler truth about it as well.

Let Me Lie by Clare Mackintosh

Published on 8th March. The police say it was suicide. Anna says it was murder. They are both wrong. One year ago Caroline Johnson chose to end her life: a shocking suicide planned to match that of her husband a few months before. Their daughter, Anna, has struggled to come to terms with their loss. She starts to ask questions about  her parents’ deaths. By digging up the past is she putting her future in danger?

A Necessary Evil by Abir Mukherjee

Published on 22nd March. India. 1920. Captain Sam Wyndham is visiting the kingdom of Sambalpore, home to diamond mines and the beautiful Palace of the Sun. When the Maharaja’s eldest son is assassinated, Wyndham realises the realm is riven with conflict. As he and Sergeant Banerjee endeavour to unravel the mystery they become entangled in a dangerous world. They must find the murderer before the murderer finds them.

The Trick to Time by Kit De Waal

Published on 29th March. A heart wrenching love story. Mona is a young Irish girl in the big city, with the thrill of a new job and a room of her own in a busy boarding house. On her first night out in 1970’s Birmingham she meets William, a charming Irish boy. They embark on a passionate affair and a whirlwind marriage before a sudden tragedy tears them apart. An unforgettable tale of grief, longing and a love that lasts a lifetime.

The Lost Girl by Carol Drinkwater

Published on 8th March. Since her teenage daughter went missing four years ago, Kurtiz Ross has blamed and isolated herself. Until, out of the blue, Lizzie is sighted in Paris. As Paris plunges into terror a sympathetic stranger offers to help a terrified mother find her daughter. The other woman’s kindness shines love and light into the shadows. The night may hold the answer to a mystery.

Conversations with Friends by Sally Rooney

Published on 1st March. Frances is 21 years old, cool headed and observant. A student in Dublin and an aspiring writer, at night she performs spoken word with her best friend Bobbi who used to be her girlfriend. When they are interviewed and befriended by Melissa, who is married to Nick, they begin a complex menage -a-quatre.

Published on 22nd March. How can love survive betrayal? For as long as they can remember siblings Isma, Aneeka and Parvaiz have had nothing but each other. But darker, stronger forces will divide Parvaiz from his sisters and drive him to the other side of the world, as he sets out to fulfil the dark legacy of the jihadist father he never knew.

Published on 8th March. A novel set in the red blooded days of Anglo-Saxon England. In the year 937 King AEthalstan, grandson of Alfred the Great, redies himself to through a great spear into the North. At his side is Dunstan of Glastonbury. His talents will take him from the villages of Wessex to the royal court, to the hills of Rome, from exhile to exaltation. Through Dunstan’s vision England may come together as one great country or fall back into anarchy and misrule.

Published on 22nd March. It begins with a painting won in a raffle, fifteen sunflowers, hung on the wall by a woman who believes that men and boys are capable of beautiful things. Two boys, Ellis and Michael are inseparable. The boys become men, and Annie walks into their lives, and it changes everything and nothing. This is a love letter to human kindness and friendship, to loss and living.